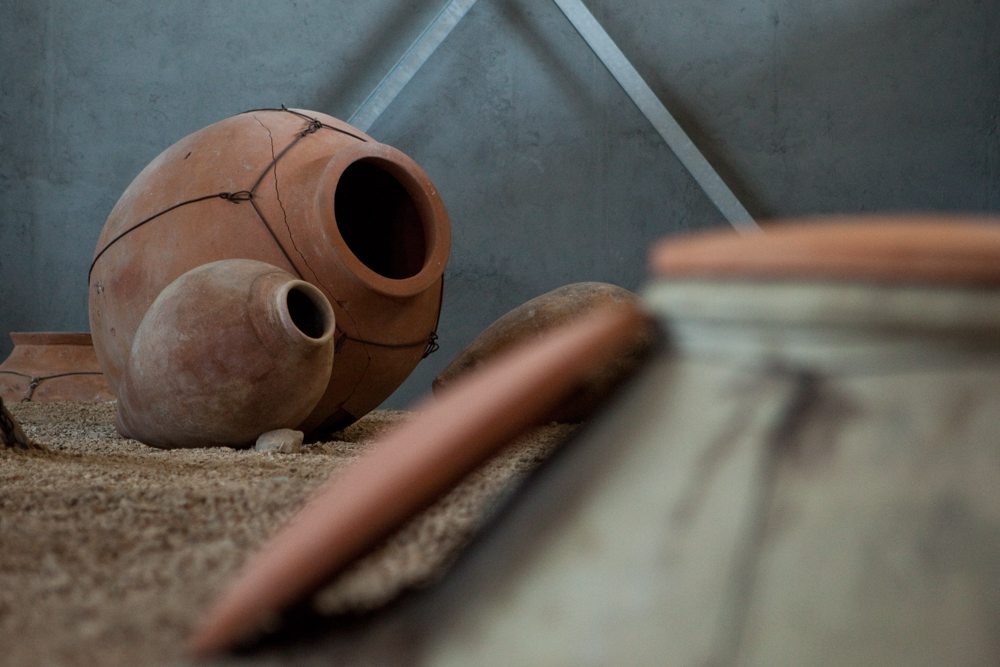 Pliny the Elder was convinced that in wine, there is truth – in vino veritas. His early adage about the drink has been followed by thousands more seeking to succinctly express its mystical properties. Whatever the motivation behind the millennia-long enchantment with wine, it has returned to Armenia.

Zorik Gharibian is a fashion mogul in Italy. You might even have bought clothing in Los Angeles manufactured by his company without knowing it. Growing up in the wine-obsessed culture of Italy, he dreamed of one day tending to his own vines in the country’s famed Tuscany region. Until he visited Armenia, that is.

After running soil tests at university laboratories in Italy, Gharibian was assured that the traditional winemaking area of Vayots Dzor in southern Armenia would be the ideal place for his vineyards. He chose Rind as the center of his operations, not far from Areni, where the world’s oldest winery was discovered.

Karas, in Armenian, translates to amphora, the clay jars in which wine was aged for thousands of years before the advent of wood barrel aging. These are the jars that were found at the ancient winery in Areni. Karasi is the name of Gharibian’s most famous production thus far. Listed among bottles of wine costing thousands or tens of thousands of dollars, it was chosen as a top 10 wine by Bloomberg from a field of over 4,000 wines.

Besides being just a name that honors a method of winemaking used in the ancient world, Karasi is actually aged in amphora. Gharibian recognizes that employing these disused clay jars is not easy: “We of course have trouble finding amphora [to use in our wine production] because unfortunately there is no longer amphora production in Armenia,” says Gharibian. The ones used by Zorah Wines – the name of his winery – were bought, piece by piece, by visiting the homes of local villagers.

Not one to be discouraged, Gharibian plans to establish a school in Rind where the art of making amphora will be revived by a new generation of expert artisans. Serendipitously, his wife, Yeraz Tovmasyan, is an expert ceramicist whose skills will be put to good use when the school opens.

If it wasn’t already obvious, Gharibian insists on originality and that goes for the grapes he uses in his wines. While most people had dismissed areni as a good enough grape to be used in quality winemaking, the ambitious entrepreneur did his research and found strains of areni that he says “can compete with any grape variety in the world.” He believes that by embracing and promoting indigenous Armenian grape varieties – as opposed to imported foreign ones like cabernet sauvignon or pinot noir – those grapes will become as well known, putting Armenia on the wine world’s map.

Tenaciously pursuing his goal of making Armenia a global player in the wine market, Gharibian says that in 2016, Zorah will release a red wine better than Karasi, the one that was listed in Bloomberg’s top ten. Asked where he gets his inspiration, he references Armenia’s 6,100-year winemaking tradition that is apparent throughout Armenian culture from social customs to stone carvings.

For Zorik Gharibian, winemaking is not a business so much as it is a labor of love. It would seem then that Pliny the Elder was right. It was in wine that Gharibian found the truth that his passion belongs in one place: Armenia.

This piece was written for Armenia Fund and was originally published here on August 3, 2014.

A Jolt for Heart Health in Zangezur