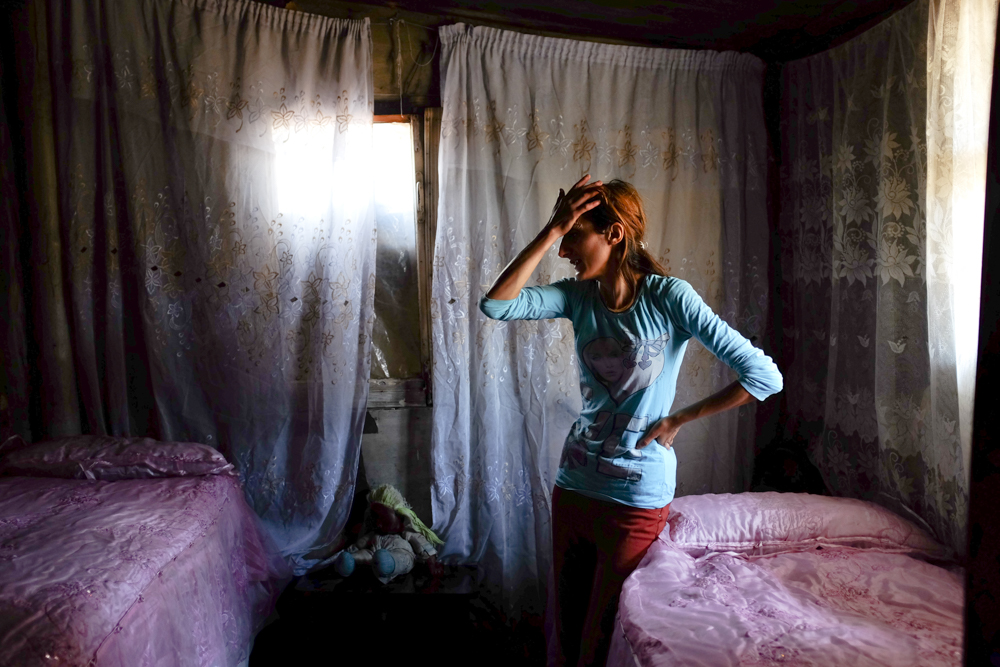 There is no bathroom. That’s the first thing you notice when you walk into her home. It’s just a rectangular room with plywood floors and a droopy ceiling that looks like it’s going to collapse. There are a few beds where everyone sleeps and a propane tank to cook potatoes and whatever else they can manage to buy. The bathroom is actually an outhouse, separate from the domik, across a small alley.

Over twenty years later, these “temporary” metal containers called domiks have become the seemingly permanent homes of hundreds of families who are still living the consequences of the 1988 Spitak Earthquake. Despite massive, partially successful, efforts to house those living in these shanties, many families, for different reasons, remain without homes.

For these families living in ramshackle ghettoes amid Gyumri’s urban hustle and bustle, the domiks are approaching a degree of uncomfortable normalcy. Nowhere is this more evident than with the children, a whole generation who have been born and raised in these squalid conditions.

They still play like children do, not fully aware that they shouldn’t be living there. Not yet trodden by the pains of life, their faces are fresh, beautiful like all children. Living in the domiks may be normal for them now but they will learn soon that it is not normal, that they deserve better.

Once it was established, Armenia Fund initiated projects to help the communities affected by the massive earthquake. Joining the ongoing effort, the humanitarian organization built apartments in Spitak, Gyumri, and Vanadzor. Although these were the areas with the greatest damage, the destruction went far beyond these two places. In Dilijan, in the Tavush region, three schools crumbled to the ground. Villages in this area, far from the quake’s epicenter, were leveled to the ground.

The government has built and provided housing to thousands of people already but there are, for various reasons, families that still have not been moved into new homes. Although the problem is expected to be solved for all residents of domiks by 2018, some of these families simply cannot wait. That is why Armenia Fund is acting now.

Anahit is dying. In her 40s, she is emaciated and bedridden, her mother sits at her bedside, tending to her, hopeful that she might live. Anahit’s four children are playing outside but she has no energy for that – she’s barely able to speak without tiring herself.

The attendant-mother says they call the ambulance three to four times a week. There isn’t any space for the kids to sleep so they sleep on the floor, sometimes having to share space with rats scavenging for food in the dark.

But what might be jarring to someone coming from the outside is not extraordinary for a child who knows only this. If she does know this is abnormal, she can’t think about it. She knows enough to know that they can’t have what she sees from the bus on the way to school so there is no point in thinking about it.

Illness is commonplace in domik communities – mental, physical, and emotional. On the one hand, the living conditions don’t allow for a salubrious lifestyle. Lack of running water, poor sanitation, mold, and smoke from indoor fires, among other things, contribute to severely unhealthy conditions for everyone in a household.

On the other hand, once sick, treatment is a rare luxury for those whose money is hardly able to cover their food cost. Although there is public healthcare in Armenia which affords free medical attention to those in need, serious health issues require specialized care which requires some monetary contribution from the patient. This additional expense is impossible for the people who live in domik communities to pay and they often suffer quietly, sometimes grasping for life through frequent visits to the emergency room, sometimes lying in bed, waiting to die.

Armenia Fund will be purchasing and allocating 20 apartments for families who are living in inhumane conditions in Gyumri’s domiks. In addition to purchasing the homes, the apartments will be renovated and outfitted with new furniture. The families will also receive financial assistance during the year. Once the children grow up, if they choose to go to college, Armenia Fund will pay their tuition so that they can get an education.

The families who will receive aid are good people who work hard but whose circumstances make it near impossible for them to be free of their deprivation. Armenia Fund is using a multi-pronged approach to providing assistance because its aim is to break the cycle of poverty from which these people suffer. Although all of its projects have a degree of urgency about them, the case of these families requires immediate attention and resolution.

Asatur, the orphan boy, is raised by his grandmother. His parents dead, she’s the one who looks after him, his siblings, and cousins.

The grandmother’s name is Siroun – it seems ironic until you speak with her: kind, sweet, nary a complaint. She is old. Her husband was a drunkard who beat her but, nearly toothless, she still smiles. Siroun, Asatur’s legal guardian, is proud of her grandson who excels in school. Looking around their living quarters, it’s unclear where the child does his homework; all you see are a few rusted beds and an uncomfortable bench for sitting. Whatever she has, she gives to the child. Beautiful indeed.

She lives in a domik in a field, separated even from the others. It looks like it’s on the verge of collapse but it seems to be doing the job for now. The lady from the city’s social services office says that it will be a surprise to go in there and come out without a rat jumping in someone’s face at some point during the visit.

These are the outskirts of the domik ghetto, where the apocalypse has already come.

This piece was written for Armenia Fund and was originally published here on September 1, 2014.

Where Education Is Valued, Education Flourishes – The Ashotsk School
Faithful to the Armenian Spirit – Karin Tak, Then and Now