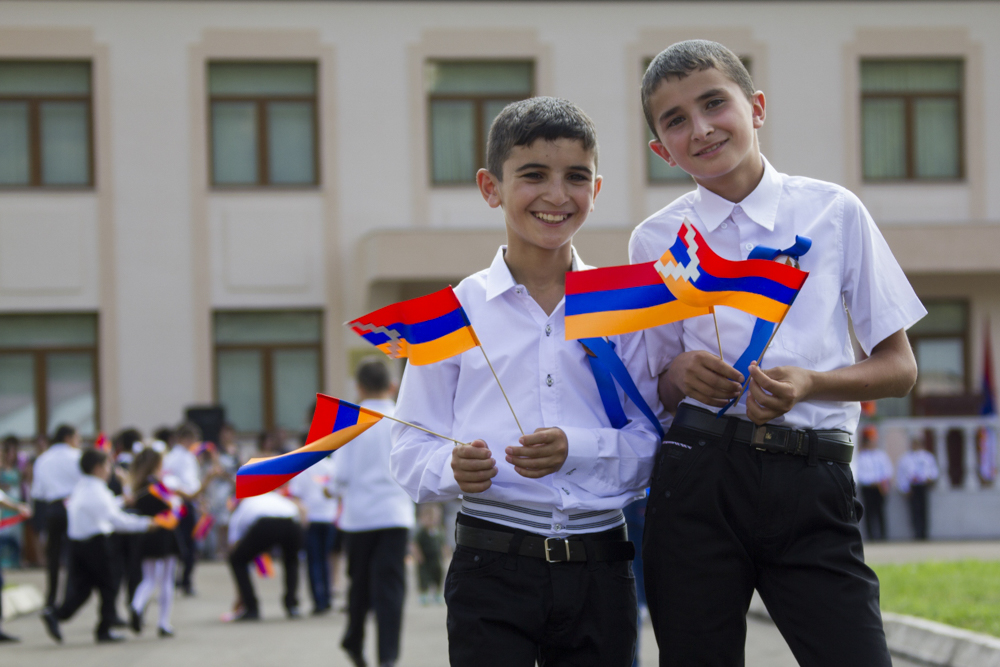 The ceasefire negotiations were underway and an independent Artsakh was in sight. On the verge of a monumental defeat, Azerbaijan, suffering from embarrassingly disproportionate military losses, chose to continue its hostilities. One of the targets for Azerbaijan’s special forces was the civilian population of Chapar village in northern Artsakh’s Martakert region. As recorded by Human Rights Watch, six Armenian civilians, including one 14-year old boy, were killed.

One of Artsakh’s oldest communities, picturesque Chapar is in northern Artsakh, close to the militarized border and the Azerbaijani-occupied Armenian region of Shahumian. Armenia Fund chose the village of 300 residents for the location a new school as a part of its Rural Development Program. The building of the new school was co-sponsored by the government of the Artsakh Republic.

The school is built with the future in mind, bearing accommodations that will allow students to have a holistic educational experience. Among the different facilities are included biology and chemistry labs, a computer lab, and a library. A unique feature at the school that speaks to its precarious geography – and with a nod to its history – is a classroom specially built for military studies.

Spanning over 10,000 square feet, the school’s campus also houses a grass sports field, as well as an outdoor playground. For Chapar’s cold winters, a boiler room was installed so that the children and faculty could benefit from central heating and not have to limit class time for lack of it.

Despite now having a brand new building outfitted with the most modern educational equipment, Chapar School’s most valued possession is distinctly antiquated: a hundred year old bell. Having survived through some of the most tumultuous times in Armenian history, the bell will hang proudly from the new building where it will continue to see off the school’s graduates in the spring and welcome new students in the fall.

This is not Chapar’s first experience with Armenia Fund. In 2012, a water pipeline almost 2.5 miles long was installed and has since provided the village with regular access to drinkable water.

Chapar is also one of the locations along the new Vardenis-Martakert Highway which is being constructed by Armenia Fund with donations from Armenians throughout the world. These developments, together with the new school and a general improvement in the village’s conditions have encouraged 15 families that had left to return and continue their lives there.

In fact, in addition to the traditional trades of the villages, which include beekeeping, animal husbandry, and agriculture, many of the village’s residents have been hired to work on the Armenia Fund infrastructure projects in and around their homes.

We can’t know what the 14-year old boy who was killed by Azerbaijani soldiers would have been if he was able to grow up. But, by continuing to build the communities that were destroyed by the War for Independence and which continue to live on the razor’s edge, we can ensure that his innocent life, and that of many others like him, was not lost in vain. The real victory in war is giving the fourteen year olds of today and tomorrow that which the ones from yesterday did not have.

This piece was written for Armenia Fund and was originally published here on September 22, 2014.

In Vino Veritas: The Story of Zorah Karasi
Where Education Is Valued, Education Flourishes – The Ashotsk School

Living on the Edge: The Noyemberyan Hospital