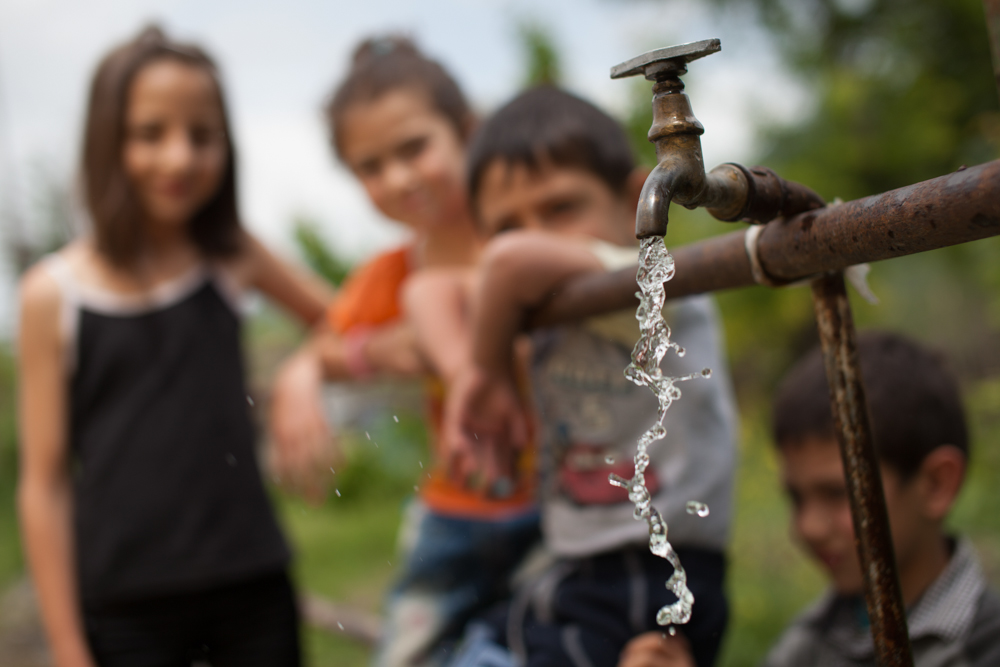 Karvachar, a town that had no running water is where Armenia Fund built a brand new distribution network that now provides the town with safe drinking water 24 hours a day.

It’s early Saturday morning. You walk over to the sink and start brushing your teeth. The cool water you splash on your face gives you a little jolt and opens your eyes. You’re awake.

Showers are always better on the weekend. No rush, just a relaxing time before continuing a day of leisure. You walk to the kitchen, thinking about what hot drink you want to start your day with. Then you see you see a steaming mug of coffee and a pot of hot tea – somebody at home has made both. Coffee first.

The cup of joe in your hand, you venture outside and turn on the hose. The trees, grass, and flowers need watering. You want to make sure your grass is green for this summer’s barbeques and you want your trees to bear more apricot and pomegranate than last year.

Everything you’ve done so far has required water. And it’s not even noon yet.

According to the United States Environmental Protection Agency, the average American family of four uses 400 gallons of water per day. That’s 400 individual gallon bottles a day and 2,800 gallons per week.

Until recently, the town of Karvachar, in Artsakh’s northwest, had no running water. The families there certainly do not use as much water as those in America but they have the same basic needs. And although the region will soon be the beneficiary of increased trade because it sits along the Vardenis-Martakert Highway being constructed by Armenia Fund, it is the most underdeveloped part of Artsakh and was heavily affected by the War for Independence.

Without running water, families need to collect water they’re going to use from either a pump or a well. The water might then be stored in improvised home reservoirs, usually using household trashcans that hold about 32 gallons.

Even if this was enough water to drink and to cook food, there isn’t enough to bathe or shower, making interfamily sickness more likely. That aside, these crude reservoirs are not subject to treatment like water that comes out of a faucet. In fact, the makeshift reservoirs are likely to turn into stagnant pools that become breeding grounds for different types of waterborne sickness that can be passed to people who come in contact with it.

Not being able to brush your teeth or take a shower are hygienic issues that could have serious consequences over time. But to not have clean drinking water available is a central issue that has a significant negative impact on public health, particularly children.

Lack of access to safe drinking water and proper sanitation is so important that it forms an integral part of United Nations Secretary-General Ban-Ki Moon’s Five-Year Action Agenda. Waterborne illnesses and disease affect millions of people a year and they are often due to contaminated water. That’s why the UN, the World Health Organization, and others have made increasing access to clean water to populations around the world a top priority.

Knowing the importance of clean water and the hugely positive impact it would have on sanitation, hygiene and, public health, Armenia Fund chose to build a brand new water distribution system in Karvachar that would serve its 570 residents. The water supply system, which cost over $400,000, includes 5 miles of pipes that connect to the town’s 120 households. Two reservoirs, with a combined capacity of 26,400 gallons, were also constructed to help regulate distribution and ensure that the flow of water is consistent. Residents now have round-the-clock water that comes directly to their homes.

While it’s unlikely that anyone in Karvachar will be taking leisurely 20-minute-long showers or watering a rose garden, everyone in the town will now have access to the basic human right of safe drinking water. And although its large-scale infrastructure projects like the Vardenis-Martakert Highway will impact the lives of millions of people, improving the lives of a few hundred is equally worthwhile for the Armenia Fund and it always has been. No project is too small if it helps people live better, healthier lives.

This piece was written for Armenia Fund and was originally published here on April 13, 2014.

Khoseenk Hayeren, Or You Can Say It In English
Drakhtik Kindergarten: A Little Slice of Heaven

A Jolt for Heart Health in Zangezur

Third Time’s a Charm: Nor Maragha