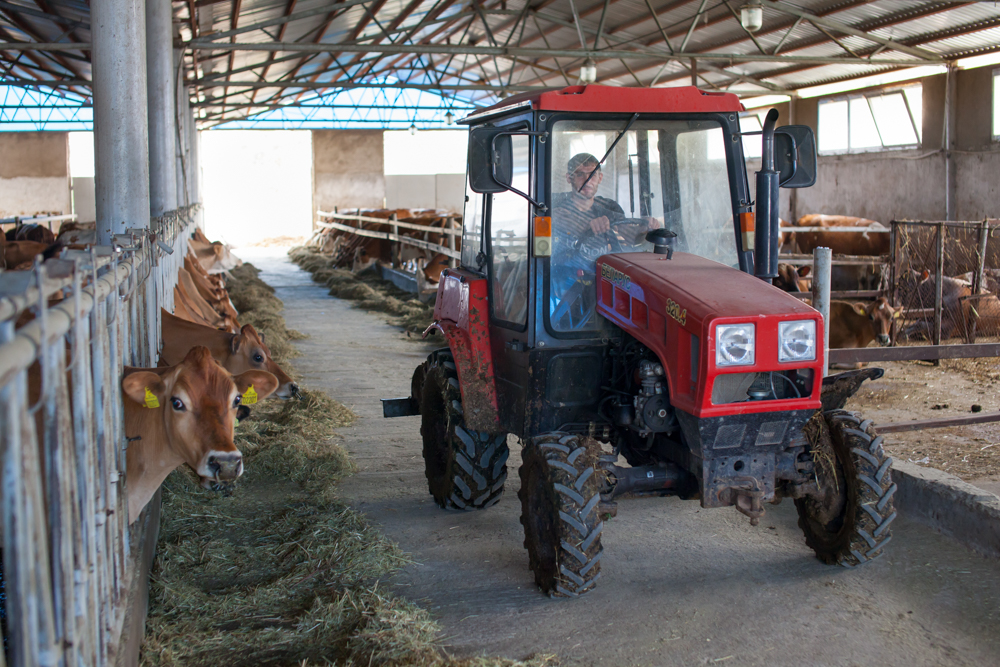 Cows have traditionally been a source of income for Armenian farmers but after independence, the agricultural industry was badly damaged. In Lusadzor, in the country’s northeast, Armenia Fund has initiated a cattle breeding project to bring back sustainable dairy farming.

As the saying goes, “Teach a man how to make milk, cheese, yogurt, butter, and cream, feed him for life.” Actually, that might be a variation of the original but the idea is the same. These integral dairy products all come from one estimable animal: the cow. For a person living in the city, the milk is necessary to make their café latte and the cheese to pair with their wine. A macaroon needs butter and frozen yogurt needs, well, yogurt. For a person living in a village, however, these products are necessary to make a living.

Armenia Fund builds roads, hospitals, and schools. It brings electricity, natural gas, and running water to villages throughout Armenia. But, just as important, it realizes that none of these can stand alone if any of these projects are going to serve the populations for which they are intended. So, in the interest of economic sustainability, it has built greenhouses in Tavush and built an agro-machinery park in the Drakhtik, a border village in Artsakh. It’s also why Armenia Fund built a model cow farm in Lusadzor, also in Tavush, where choice cows are bred and then distributed to local farmers.

In Lusadzor, Armenia Fund imported 150 purebred, pregnant cows from Switzerland, Denmark, and Sweden. As calves were born, they were distributed to newly established mini-farms administered by farming cooperatives. At the initial stage, Kirants and Navur, two local villages, received cows at their mini-farms, with plans to establish four more in other villages.

Cows-as-revenue is not a concept new to Armenia. The Caucasian Grey, a breed developed during the Soviet Union and adapted to the conditions of Armenia, was the primary dairy cow in use for decades. After independence, the corresponding economic collapse took with it the agricultural industry, with a variety of reasons leading to cows that produced less milk. Whereas the best cows were producing approximately 1,060 gallons of milk per year before, the average fell to as low as 315 gallons of milk per cow, per year.

The cows imported from Europe by Armenia Fund are of the Simmental, Simmental Fleckvieh, and Jersey varieties. Not bred specifically for Armenia’s conditions, they require more care than the Caucasian Grey, which they receive in Lusadzor and at the mini-farms. To ensure that farmers know how to able to properly tend to the new type of cattle and thus maximize their income, the model farm in Lusadzor is also equipped with a special training center where experts teach best practices to the recipients in the villages.

With the proper care, the new cows are able to produce five times the national average of milk per year, or about 1,585 gallons. Simply put, this translates into five times more income than the farmers would otherwise be getting from the Caucasian Grey variety.

In the long run, the objective of the program is to introduce variety into the gene pool. With greater genetic variety, the cows are better bred and they produce a larger quantity of the milk needed to make the dairy products that create income for farmers.

It has nothing to do with fishing but bringing high-quality cows to northeast Armenia and showing farmers how they can get the most out of them stays true to the principle of the adage, “teach a man to fish, feed him for life.” It is part of the work that Armenia Fund does – made possible by a worldwide network of generous donors – to promote self-sustainability in its holistic approach to economic development and progress. With growing production of milk, cheese, butter, yogurt, and cream in Lusadzor, it looks like they have the right idea.

This piece was written for Armenia Fund and was originally published here on July 25, 2014.

The Family That Saved a Village: The Ekserciyan Family and Ditavan
A Healthcare Hub Where Fire Once Rained

Bringing the Elixir of Life to Karvachar

Living on the Edge: The Noyemberyan Hospital