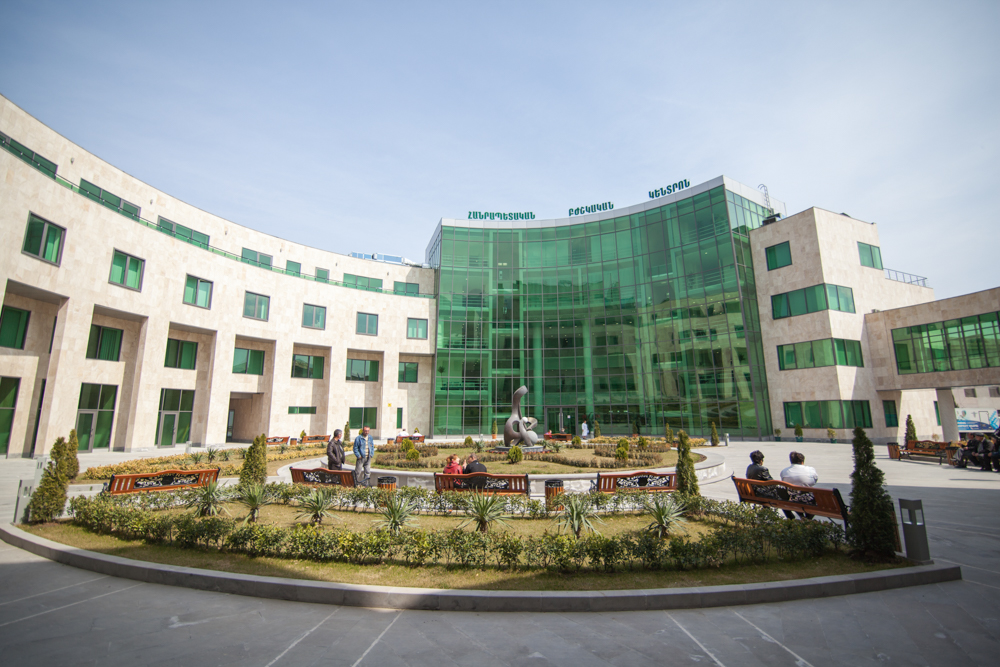 It would have been nice to have a hospital then, in 1991. The shelling from Shushi had started in November and wouldn’t stop until May of 1992. Only when Armenian forces liberated the historic Armenian town from Azerbaijanis who were using it as a staging ground for their attacks on the civilian population of Stepanakert.

Thousands of civilians were under fire in one of the most brutal attacks on a civilian population, reminiscent of the firebombing of Dresden. It was due to the unfettered killings of World War II, Dresden included, that the Geneva Conventions sought to address in 1949. Although these rules of engagement didn’t exist during the Second World War, they did in the 1990s when Azerbaijan was purposely targeting civilians.

According to Helsinki Watch (now Human Rights Watch), “The bombs Azerbaijani forces use are primarily 500-kilogram (half-ton) bombs and cluster bombs. Cluster bombs explode into hundreds of small balls and are intended to hurt people, as opposed to structures.”

The attacks on Stepanakert were so severe, that Helsinki Watch issued a report where it said that it “condemns in the strongest terms the indiscriminate bombings and continued shelling of civilians in and around Nagorno Karabakh, acts which violate the rules of internal armed conflict set out in the 1949 Geneva Conventions.”

In fact, Stepanakert did have a hospital – from the 1930s. It was in such poor shape that it’s a wonder the building survived the heavy damage it sustained during the Artsakh War. The same might be said about the people, damaged but standing tall.

Without a functioning hospital, there was no adequate medical center with the needed technology to serve the population of Stepanakert and environs. To address this serious and immediate concern, Armenia Fund was tasked with building a new hospital. The humanitarian organization was empowered by its worldwide support base and an extremely generous donation of $22 million by Hayastan All-Armenian Fund Board of Trustees member Samvel Karapetyan from Russia.

This project was the final piece of a ten-year healthcare development initiative that sought to bring the level of medical attention in Artsakh to internationally acceptable standards; the first phase was the construction of a polyclinic.

In just over three years, Armenia Fund built a brand new hospital according to its scrupulous standards. The facility, located in the center of Stepanakert, is outfitted with the modern medical equipment needed to provide patients with the quality of healthcare they deserve. In addition to 120 hospital beds, there is a surgery department, as well as an emergency room and urgent care unit. The polyclinic, built before the hospital, is now physically attached to it to provide ease of access for patients.

Although located in Artsakh’s capital, the breadth of services offered by the medical center make it the first stop for patients with an array of health issues. In addition to having available high quality healthcare, the hospital provides its services to residents free of charge.

The old hospital, now disused, is scheduled to be demolished in fall of 2014. Although its demolition ushers in a new era of healthcare in Armenia – Artsakh included – it won’t necessarily be a happy occasion. It was, after all, the same hospital that not only kept standing during the bombardment of Stepanakert and throughout the war, it lasted long enough to allow the new building to be built. So, for the doctors, nurses, and staff who worked there, its end will be bittersweet.

By 1992, Armenian heroes liberated Shushi and stopped the Azerbaijani-induced horror raining from the town upon Stepanakert. The intrepid residents of the city emerged from their underground shelters to continue their lives, learning during the war to live with little food, care, or comfort. It is the resolute belief by their brethren, Armenians throughout the world, that Artsakh’s residents should not have to relive the troubles of those days. It is upon this belief that Armenia Fund built the Stepanakert Hospital – for today and for posterity.

This piece was written for Armenia Fund and was originally published here on August 20, 2014.