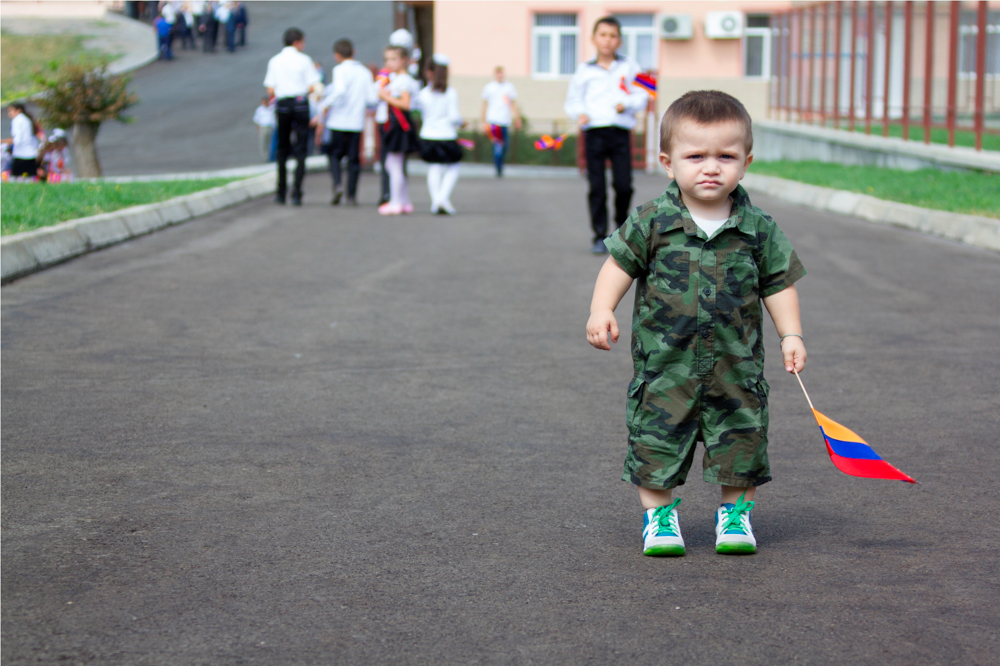 Her head is held high and her speech is formal. If you hadn’t arrived on a sparsely driven road winding through low hills and recently cut fields of grass, you would think she was the headmaster of an elite private school. Instead, Hasmik Khachatryan is the principal of the school in Ashotsk, an agricultural town in northern Armenia, near the Georgian border.

The old, rotting school wasn’t much to look at. Built to accommodate a much larger student body – there used to be a working factory in town – the school was unable to maintain the building. And, as the student body decreased because the factory workers left, the larger old school was unnecessary for the needs of the town.

It was in the dairy land of Ashotsk, in a part of Armenia seldom heard of or seen, that Armenia Fund undertook the responsibility of going to the town and seeing what could be done. Ultimately, after extensive testing, experts determined that the old school was not worth renovating and that a new school should be built. And that’s exactly what Armenia Fund did.

The new three-story building, constructed according to Armenia Fund’s unyielding quality standards, sits ready to serve the student body of Ashotsk when it opens its doors for the first time this September.

In addition to the new classroom outfitted with brand new furniture, the school also includes a computer lab with seven fully-equipped computers, a cafeteria with an adjoining kitchen where daily hot meals will be prepared for the children, and an indoor gym with a basketball court where students will be able to complete their physical education.

It seems, however, that one place is more exalted than the rest. The school’s library is where a decades-old collection of books will be housed. Principal Khachatryan says that even in the old school, the administration went through great pains to preserve the books which included tomes of Armenian and international literature.

“We preserved those books for many years in difficult times,” says Khachatryan proudly. “It is now a priority for us to make sure these books are available for the current students and future generations.”

Finally, there was one very important addition to the state-of-the-art Ashotsk School that was hard to come by in the old building: heat. Previously, during the brutal winters of Ashotsk, heating was a problem that made it difficult for the school to function properly. Now, not only has a new heating system been installed, because of the smaller size of the school and the use of hermetically sealed windows and doors, heat is much more efficiently retained. Not having to worry about being warm at school during the winter will be a welcome novelty in the town.

“With our continued support of school-building and renovation projects throughout the regions of Armenia and Artsakh, we hope to help prepare a highly educated generation, one which will be entrusted with the further development of our homeland,” said Ara Vardanyan, executive director of the Hayastan All-Armenian Fund.

The investment Armenia Fund is making in promoting a highly educated generation, with the continued support of Armenians worldwide, can be expected to pay off in Ashotsk: over 90% of students there go on to pursue higher education. No wonder the library is the most popular place in the school.

The Only Place Left – Shengavit Kindergarten