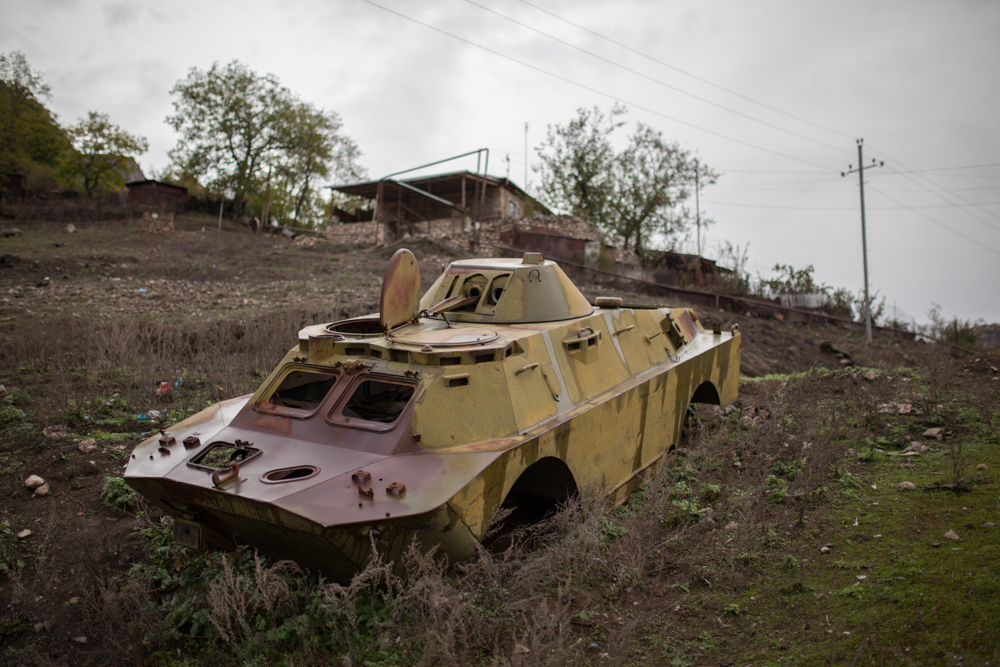 In Karin Tak, a village known for its heroism during the Artsakh War for Independence, Armenia Fund has brought clean water, renovated part of a school, and continues to implement new projects to improve living conditions.

The old maxim, “never underestimate your enemy” has been proved time and again. Based on history, it should include one minor addition: “especially if your enemy is Armenian.” The legendary battles at Van, Musa Dagh, and Sardarabad are well known and showed the even when outnumbered and downtrodden, Armenians will fight. In the modern era, it is the story of Karin Tak – a village tucked under the cliffs of Shushi – that recalls the Armenian spirit that has trampled fate when it seemed impossible.

On January 26, the Azerbaijani military showed up with fully armed soldiers aided by armored vehicles. They may have been expecting a huge fight except there were no soldiers stationed in Karin Tak: the target was the village and its residents. If successful, Stepanakert, the capital of Artsakh, was the next stop for the attackers; Karin Tak was the only thing that stood in their way.

The people knew they were up against a depraved enemy – they had incessantly been terrorized by Molotov cocktails and burning tires sent their way by the enemy soldiers camped above them in Shushi. Even then, nobody had left.

Armed with nothing other than hunting rifles and whatever else they could find in their homes, men, women, children, and elderly entered the streets for a fight with trained soldiers and their artillery. In the end, although dozens of villagers were killed, over a hundred Azerbaijani soldiers were dead and several of their armored vehicles either captured or destroyed. The Armenians – the Armenian villagers – had won.

Amid this heroism, the realities of life in a village remain: there were many infrastructural issues that needed to be addressed. With this in mind, Armenia Fund has implemented several projects in the village to increase the standard of living so these valorous residents can lead the normal lives in the peacetime they fought to win.

A rural place with farmer and rancher residents, the flow of clean water is not just a matter of quenching thirst, it’s a matter of livelihood. But, the village’s water infrastructure was crumbling and outdated. One example was that the pipes were above ground, meaning that in the winters, the water flowing through them would freeze. Another was the sad state of the reservoir that served the village: too small to make much of a difference, too old to work properly.

Revamping the water infrastructure began with running over three miles of brand new underground pipe to bring water to 40 households. Previously, the residents in these households had no regular access to clean drinking water. This part of the project included constructing new water intake, purification, and sanitation stations. To fix the reservoir problem, Armenia Fund built two new reservoirs with a combined capacity of over 7,000 cubic feet, compared to the old one which measured 1,765 cubic feet. The increased capacity helps the village have regular, continuous access to clean drinking water.

Also in bad shape was the school. In the mountainous climate of Artsakh, the same winters that freeze water in old pipes make heating a requirement for buildings. The first project that Armenia Fund implemented at the school was to outfit the building with a new heating system. It then turned its attention to the lack of adequate space for physical education and built a new gym.

Though these important projects have already been completed, the work in Karin Tak continues. Armenia Fund is currently in the process of building a new community center and events hall where village residents will be able to conduct their governmental, administrative, and social business. Thereafter, the focus will be on the implementation of agricultural projects that will help economic development.

When the villagers of Karin Tak crushed the Azerbaijani military, they awakened the Armenian spirit that then led to the liberation of Shushi and the independence of Artsakh. Armenians around the world, through the Armenia Fund, have devoted efforts to rebuilding Karin Tak and the rest of Armenia and have proved that the Armenian spirit can beat insurmountable odds not only when faced with the prospect of elimination but also when presented with the potential for success.

This piece was written for Armenia Fund and was originally published here on October 28, 2014.

Breaking the Cycle of Poverty: Gyumri’s Domiks
Third Time’s a Charm: Nor Maragha

Bringing the Elixir of Life to Karvachar