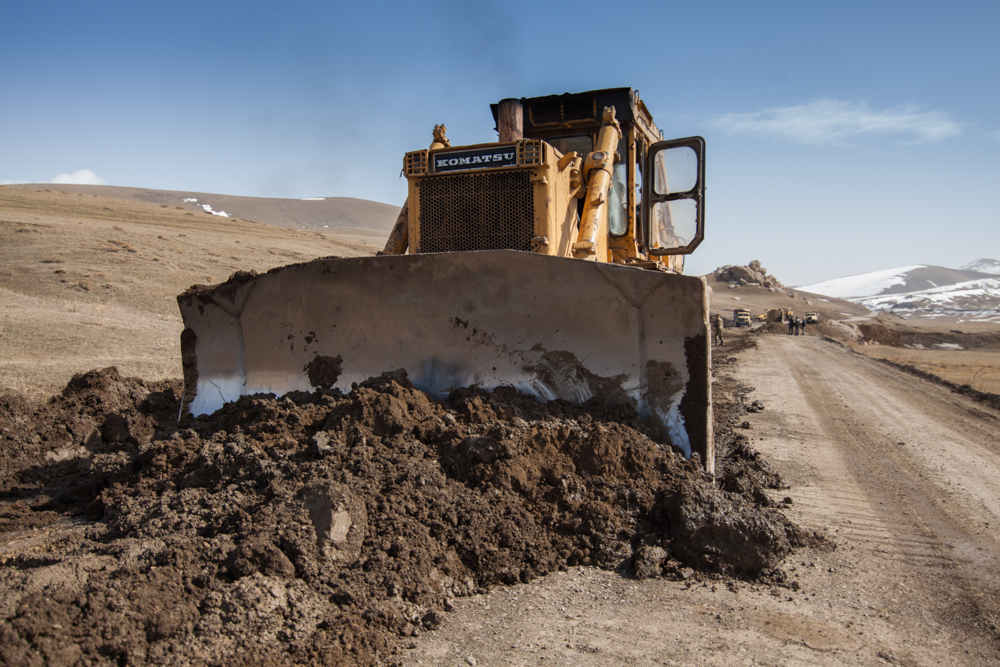 Roads. They connected the edges of the Roman Empire, allowing armies and trade to travel freely, with relative ease, as needed.

Two millennia later in the United States, they connect the country’s vast territory so that someone can get on the Interstate 5 (or, “the 5” if you’re from California) in San Diego and not get off until after they reach Canada. Or, jump onto Interstate 10 and take it all the way to Florida.

Over fifty years ago, US President Dwight Eisenhower, in explaining the need for a network of roads, said, “A modern, efficient highway system is essential to meet the needs of our growing population, our expanding economy, and our national security.”

Today, Armenia needs a highway system that will help to expand its economy, ensure its national security and, in turn, allow the population to grow. Armenia Fund is working toward these goals by building the Vardenis-Martakert Highway.

The highway is going to connect what will be an integrated transportation network open to every kind of vehicular traffic. When complete, the roads connecting the Republic of Armenia and the Artsakh Republic will allow for a free flow of people and goods between communities.

Based on the experience with the Goris-Stepanakert Highway – the first major pan-Armenian effort to rebuild the country – the positive impact on local communities will be significant.

A project to rebuild the road destroyed during the Artsakh War through incessant shelling by Azerbaijan, the first highway was an $11 million investment, all of which was spent in the country.

Since its completion, over $38 million in revenue has been generated in tourism alone and the 65,000 residents in the communities along the road have benefited from having direct access to medical care, trade, and tourism.

Artsakh’s only connection to the outside world until the Stepanakert airport is opened, the roads are indispensable to improving the economy of hard to reach areas of the country.

The 72-mile-long highway will make it easier for agriculture products from the northern regions of Artsakh, including the 30 villages along the road, to reach the economic center of Yerevan and beyond. Whereas it currently takes approximately 6.5 hours to reach Yerevan from the border region of Martakert, it will now take less than 4.5 hours.

By connecting to Armenia’s highway network, goods from Artsakh will have an easier time reaching the Black Sea port of Poti, in Georgia, for export to foreign markets. Selling high-quality, competitively-priced goods – from fresh produce to the wine of Martuni – in foreign markets has the potential to positively impact economic development.

Able to work the rich farmland of Artsakh and have a ready market for their products, farmers will be take care of their families and will have every reason to stay. The improved connection between different parts of Armenia will be a boon to regions inside the country, as well.

Gegharkunik, land of the majestic Lake Sevan, has a climate best suited to growing potatoes but with the new highway, the abundant fruits and vegetables farmed in northern Artsakh will have a new and accessible market where there is a demand for its products.

The impact of the road also extends into tourism. As Artsakh makes itself a more attractive destination for adventurous travelers, the regions of Karvachar and Shahumyan are prime candidates to benefit from an increase in visitors. Because tourists will be able to enter from one end and exit out of another – an option not currently available – experiencing the whole of Artsakh’s sublime beauty will be easier and more attractive.

Following the comprehensive and lengthy project bidding and decision process, construction began immediately. In mid-February, as weather conditions improved, crews started working on the road – and it has already started making a difference.

As of the first week of March 2014, 150 people have been employed and by summertime, that number will double to around 300 people working on the project. In total, before the highway is even opened to the public, over $30 million will have been injected into Armenia’s economy.

Symbolically, the Vardenis-Martakert Highway, once connected to the other transportation arteries in Armenia and throughout the region, will form a circle. It is the culmination of a multiyear, pan-Armenian effort to strengthen and develop Armenia – an effort that is the source of pride and renewed national confidence.

Through the vision and unity of purpose of the world’s Armenians and the Armenia Fund, the country is stronger – and things seem only to be getting brighter.

This piece was written for Armenia Fund and was originally published here on April 3, 2014.