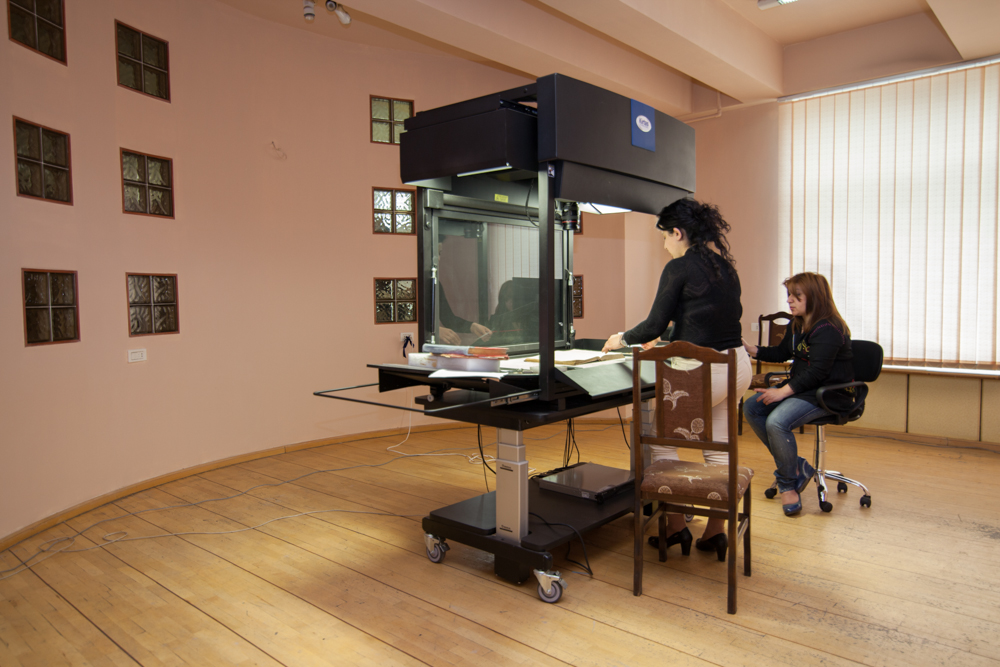 A building might amaze an observer, but a book can inspire the world. When nothing but a column remains from that building, the ideas from a book continue to teach and shape the future. If they’re preserved, that is.

From the monasteries of the Mekhitarists to the printers of Calcutta, to the writers of Shushi, Constantinople, Tiflis, and Yerevan, the corpus of Armenian literature is vast – and old. Although there are libraries in many of these places and beyond, the main repository for Armenian texts is in Armenia.

The National Library of Armenia is a mammoth institution. It contains millions of volumes that are a record of every part of Armenian history, as well as the history of other peoples.

Among this collection, there are books dating back over 500 years, to 1512. The National Library over the years has gone to great lengths to preserve the integrity of these books so that future generations may enjoy them and learn from them. As time passes, however, allowing these books to be exposed to light, air, and people complicates the already difficult preservation process.

Fortunately, with the technology available today, it’s possible to preserve books digitally so that a wider audience can enjoy them without using a physical copy. And because duplicating the digital version of a book is much easier, books can be copied and secured for preservation and storage in perpetuity, without worry that they might be lost.

All the National Library of Armenia had to do was digitize the books. No big deal, right? Wrong.

The machine to digitize books, servers to store the information, as well as the additional furniture and tools needed to complete the project, do not come cheap. In all, about $130,000 would be needed for a setup that could do the job, and do it well. That was a sum the National Library didn’t have so it approached Armenia Fund for ideas.

Although best known for its infrastructure projects like roads, schools, hospitals, and agricultural improvements, Armenia Fund also works on other important initiatives of national interest. And knowing this was an issue that they could help with, Armenia Fund conveyed the idea to Jose Tahta.

Mr. Tahta, an Armenian from Argentina, was not new to pressing undertakings that had a big impact: the humanitarian benefactor whose assistance built the first school in Vaghuhas village in Artsakh’s Martakert region after the old one had been leveled during the Artsakh War.

Having entrusted large sums to Armenia Fund in the past for infrastructure projects and having seen them come to fruition, Mr. Tahta decided that it would be a good investment and agreed to donate the funds necessary to complete the library digitization.

The process, including a large format book scanner, is able to record old and new books, as well as maps and posters. The digitized material is then stored on the Library’s new, state-of-the-art secure servers and the scanned books and other material are stored in their archives. Once the process is complete, the digital material is made available for use electronically.

Marrying the will of the National Library of Armenia, the generosity of Jose Tahta, and the organization of Armenia Fund, centuries-old Armenian literature that was previously only available to researchers who could physically be in Armenia is now available to anyone in the world with an Internet connection.

Most of the time, Armenia Fund is bringing the gifts of benevolent people from throughout the world to Armenia. With the digitization of the National Library of Armenia’s book, it’s bringing the gift of knowledge from Armenia to the world.

You can enjoy the digitized books online by visiting: http://nla.am/eng/

This piece was written for Armenia Fund and was originally published here on May 14, 2014.

Gifting Peace of Mind: The Ororots Project
The Vardenis-Martakert Highway