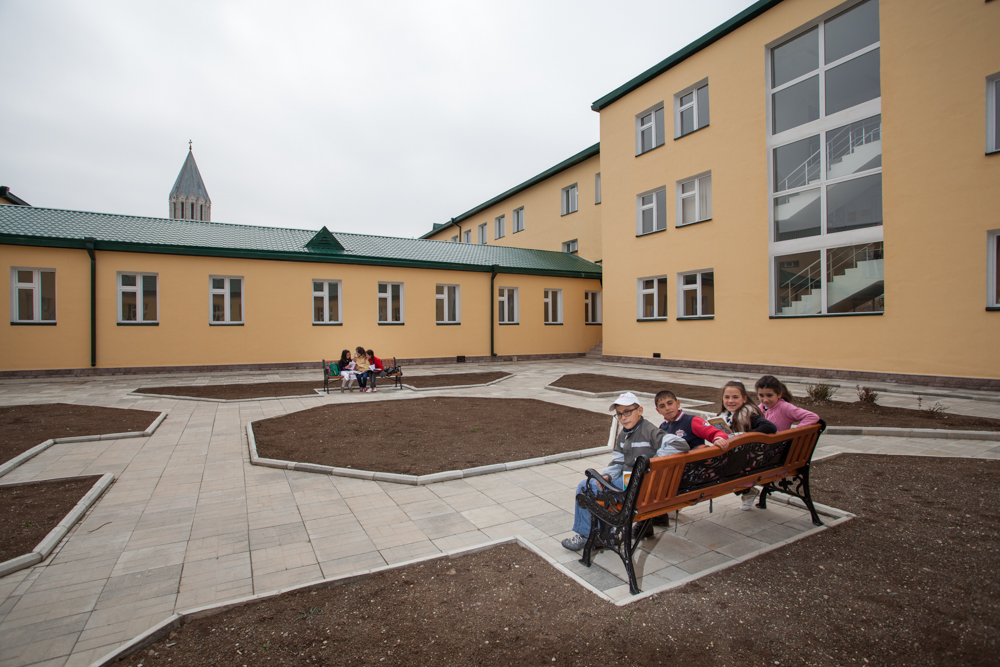 Shushi sits atop Artsakh like a crown. Its peaceful beauty today makes it hard to believe that this Armenian town was where nonstop Azerbaijani attacks were being launched against the civilian population of Stepanakert. It wasn’t the first time Shushi was the center of an attack on Armenians: in 1920, Turkey and Azerbaijan colluded to massacre 20,000 Armenians in the town, continuing the genocidal policies being effected to the west.

In the early 1990s, it was after months of shelling by Grad missiles while Armenian soldiers were away fighting in other regions that those men were able to return, liberate the town, and stop the inhumane attacks on civilians by Azerbaijani forces occupying Shushi. It marked a turning point in the Artsakh War for Independence.

The liberation of Shushi was a feat of deft military strategy: outgunned and outmanned Armenian soldiers were tasked with taking a town on higher ground, a mountaintop, and one of the most difficult maneuvers in war.

Its military significance aside, Shushi has been at the center of Armenian history for centuries. Thus, rebuilding the town, badly damaged during the war, to allow its residents to have relatively normal lives was a top priority for Armenia Fund.

Since Artsakh’s independence, there have been over 30 projects that have been funded entirely by donations made by Armenians throughout the world.

Projects have ranged from renovating streets totally ruined during the war to restoring the library to making improvements to the hospital. A cornerstone Armenia Fund project, recently completed, was bringing 24-hour, clean, safe-to-drink running water to the whole town for the first time in 20 years.

Besides the integral infrastructural improvements, an emphasis has been placed on developing Shushi’s educational facilities: of the over 30 projects, 11 have focused on the educational. Destroyed or badly damaged like most everything else in the town, schools were restored or built anew by Armenia Fund to ensure that Shushi’s children had a place where they could attend classes. Today, of the 700 children attending schools in Shushi, 450 are in the Khachatur Abovyan School reconstructed by Armenia Fund.

And the progress is ongoing. The Yeznik Mozian Vocational School is a new facility where young people can learn a trade, developing practical skills in fields like carpentry, metalwork, construction technology, and machinery operation that are in demand. The only one of its kind in the region, the school is open to students from throughout Artsakh, as well as the rest of Armenia. Upon completion, graduates are able to enter the workforce, generate income, and build and provide for their family.

In a country still feeling the effects of war, some children do not receive the parental supervision they deserve. For that reason, Armenia Fund is constructing the Shushi Boarding Kindergarten – an orphanage where children receive shelter and have access to the town’s educational facilities, as well as the opportunity to attend a vocational school later in life.

Shushi’s reputation as an historical hub for Armenian culture also figures into the work that Armenia Fund does there. Most recently the reconstruction of the Shushi Culture and Education Center has sought to reestablish a base for cultural activity. The center will include arts and crafts areas, a folk music band and dance group, a puppet theater, as well as a modern, HD surround-sound movie theater. Supplemental financing from Artsakh’s government is currently going toward building a modern theater stage, as well.

These ongoing projects complement the established institutions in the town that Armenia Fund helped get back on their feet, particularly the Daniel Ghazaryan Music College and Muratsan Vocational School. In the former, puppet theater and dance rehearsals are already attended by schoolchildren and teenagers from Shushi and nearby towns.

In all, since the end of the Artsakh War, Armenia Fund and the Armenians throughout the world who donated to it, have realized over $11.5 million in infrastructural, educational, and cultural projects in Shushi. The impact on the town’s vitality is as plain as day.

The liberation of Shushi was a great victory. Winning the war and securing Artsakh’s independence was an even greater victory. The greatest victory will be to remember and realize what our soldiers were fighting for and what our people died for – the right to live and prosper in a free Armenian land. The work of Armenia Fund is based on a belief in that right and through their contributions, Armenians everywhere have been a continuing part of making it a reality.

This piece was written for Armenia Fund and was originally published here on May 9, 2014.