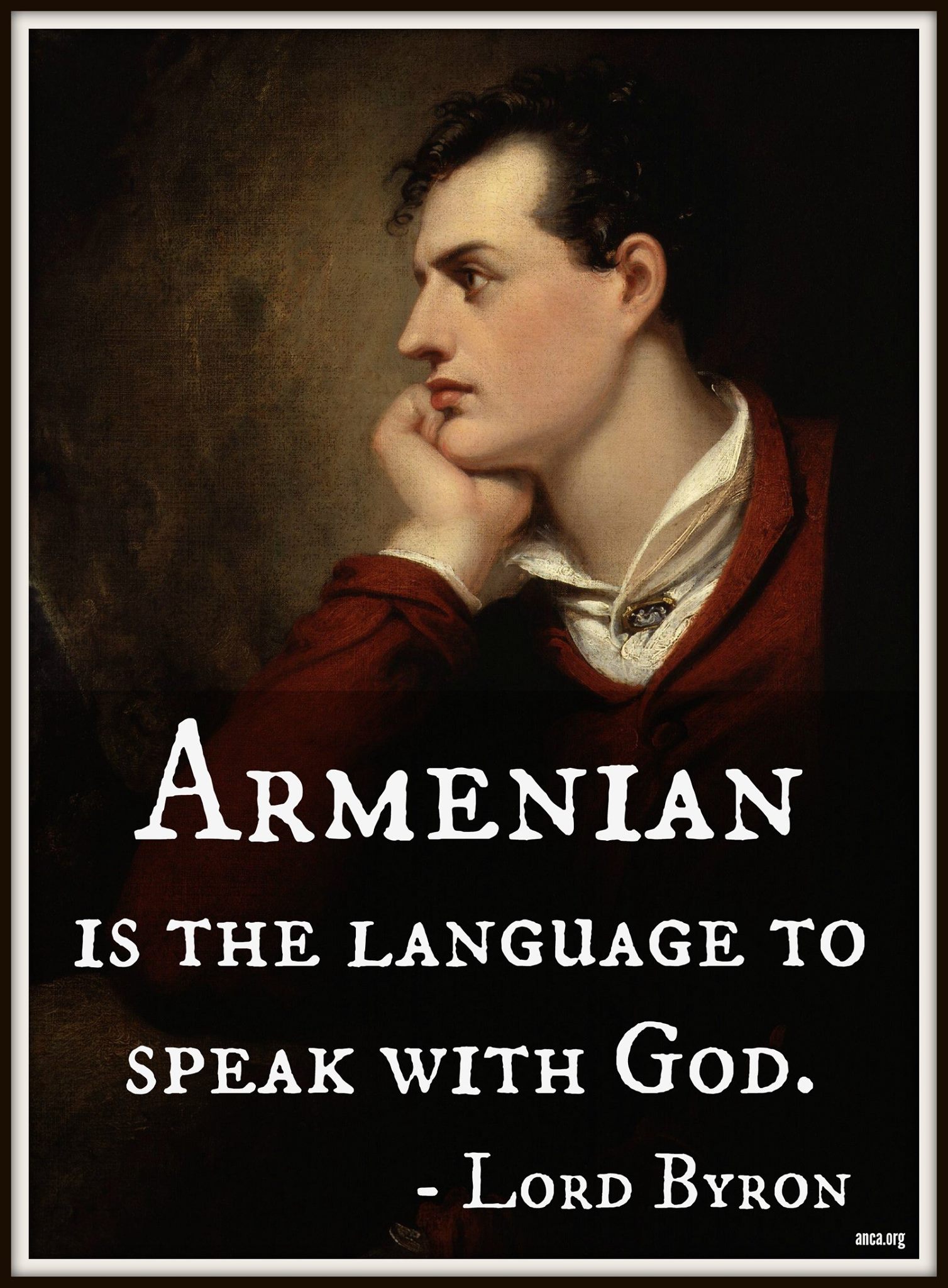 It’s hard learning Armenian. The obviousness of that statement is clear to anyone who knows the language. For students and speakers of the language alike, it’s indisputable. The ancient, convoluted pronunciation rules; the syntactical flexibility that allows you to say the same thing with five words 20 different ways and still get your point across; the myriad dialects suggestive of a much larger land than currently exists – which serves to remind of the vast lands Armenians once inhabited before successive onslaughts and submissions.

But I mean something different. The personal difficulty one might have with those pronunciations, the challenges they may face with constructing the sentences with the fluidity required of a native speaker, or much less, are that person’s business and matters of their mettle. I’m talking about the challenges these individuals who are far from fluent, or even close, that are imposed on them not by language but by people – Armenians.

The most formal Armenian education I got was whatever is gotten by 4th grade. Thereafter, I was all smiles as I entered the public school system – a vicious place unlike the uniform (indeed, pun intended), disciplined, no-nonsense world of Armenian private school. If ever one is interested in testing the tenacity of their teachings with a child, they should send them to public school.

Within a few years – two or three – I was about as assimilated as a sugar cube in water; you could hardly tell me apart. This was not a sudden, unfounded change. I was surrounded by non-Armenians whose attitude toward foreigners, or what they considered foreign, was far from welcoming. Being the friendless new kid in public school, I desperately wanted to fit in. I shirked every aspect of my Armenianness that I could, and language was at the top of what was going on the chopping block.

If ever my parents spoke Armenian with me in public, I would turn red with embarrassment. Their carelessness,- in my slavish, juvenile mind – let the non-Armenians in on the secret that we were not the American I saw myself as. I couldn’t understand why they had immigrated here from Armenian-speaking lands to this place they extolled as what saved them yet they continued speaking Armenian, eating Armenian, acting Armenian. I resolved that American was what I was and that was it.

I played baseball (possibly the most nonsensical of all sports to an Armenian), football (a close second to baseball), I only spoke English, I listened to rock and roll and heavy metal (the latter being the nonsensical parallel of baseball in the musical world, if it could be considered music), I developed a love affair with American muscle cars, and I preferred burger joints and hot dogs to any food prepared at home. I refused to speak Armenian (while my Mom would refuse to speak in English) and, coincidentally, I forgot it, all of it – how to read, how to write, almost completely how to speak.

Then I met them. Those who I can only describe as racists. Or maybe xenophobes, if we want to be slightly euphemistic. Over the years, they came out of the woodwork in the most unexpected places, in the most subtle of ways. For these people, it didn’t matter how much I tried, how American I thought I’d become – I was still an immigrant, an outsider, a foreigner. And I began to wonder: I was actively attempting to expunge, in earnest, a 5,000 year old culture which I was born into while some non-Armenians around me were clamoring for an identity, whether real or made up. My idiocy slapped me silly.

But I had walked far enough away from the tribe, and for enough time, that I could at least know how to fashion myself. Spiraling into an outwardly extreme supposed Armenian persona was uninteresting to me and, frankly, overdone. I saw “aga, shakhs, aper, khob”, the blotte or tavluh, the crosses or clothes, as replacements for what we had lost somewhere along the way. My familial upbringing, as much as I tried rejecting the Armenian underpinnings, had left its residue. With it came the contrast of what we were against what we thought we were supposed to be. So, I embarked on the excruciating journey of learning how to be Armenian in the truest form I could conceive.

Excruciating. That’s a rough description of what should be a pleasant adventure of discovering the wondrous essence of your being. Or: this is supposed to be fun, not painful. But it is. It is painful when you are trying to eke out words in Armenian, torturing yourself so foreign verbiage doesn’t invade your speech lest you become complicit in perverting the language you are struggling to maintain, and, alas, your fellow interlocutor is more concerned with highlighting your inadequate fluency and, naturally, their superior usage ability – their impeccable reprimands infused with “ishteh” and “yani” – than with acting as a guide toward the realization of, ostensibly, both your goal. The concluding recommendation being, “you can say it in English” or, if especially audacious, switching languages on you without notice, thus surreptitiously opining about the (inferior) quality of your spoken work.

This proclamation from the same person who is likely a steadfast source of the righteous imposition that “bedk’eh khose(e)nk Hayeren” (“we must speak Armenian”)! Imagine the state of your brain as it is trying to compute someone telling you that you must speak Armenian while telling you that if you can’t manage – and it’s obvious you can’t – just switch to the other language that they, since they’re more multilingual than you, can understand just as well. Instances like these may very well be the beginnings of bipolarity.

I’m loathe to offer this as a crusade of solely personal proportion. This is one example of what I know is commonplace. As a Diasporan, and one who not only lives, but works, within its (otherwise supremely pleasant) confines, I am uncomfortably privy to the growing apathy and, in my estimation, lethargy, which has started to overtake the community. It requires much less energy to let your surroundings have their way with your psyche and person than to confront them with the conviction of who you are. It requires an exceptional level of diligence and discipline. And, for those who have taken the valiant plunge into cultural preservation and growth, the last thing on their long list of worries should be the overt or subtle discouragement of those who need to otherwise be the cheerleaders.

I already disdain that I may not ever be able to speak Armenian as beautifully as my parents, or the poets whose gifts I want to read – and understand. But that I not become the charlatan who discourages the believer that they may realize such an unattainable treasure is of similarly paramount importance. To damage the wish of a striver to reach that end is unforgivable.

Hence my gratitude is conveyed to the corps of individuals whose object is not to outdo but to include. Thanks are due that they believe that one’s elevation requires them to elevate, not smile down from upon their perch. Without the sagacity and measured patience of this limited group, the treacherousness of this journey would be compounded unimaginably.

To the the bipolar self-styled linguists, I am writing this in English because I can’t write it in Armenian – I probably couldn’t even say it the way that I wanted without taking twice as long. But, I’ll get there, determined to gain total facility in this unique language, my language. Or, for their understanding ease: yani, no problem, brat.

Hayeren will prosper and perpetuate under the tutelage of the previously incapable upon their mastery of this language they love. Fortunately, history is not made by the faithless.

This piece is dedicated to the haters and the innocent bystanders.

Cited in Dr. Shushan Karapetian’s dissertation at UCLA titled, “How Do I Teach My Kids My Broken Armenian?”: A Study of Eastern Armenian Heritage Language Speakers in Los Angeles.

What is #ElectricYerevan?
Bringing the Elixir of Life to Karvachar

On Sanctimony and Humility, Lessons from Abigail Adams

In Defense of (Almost) Exclusively Reading the Classics