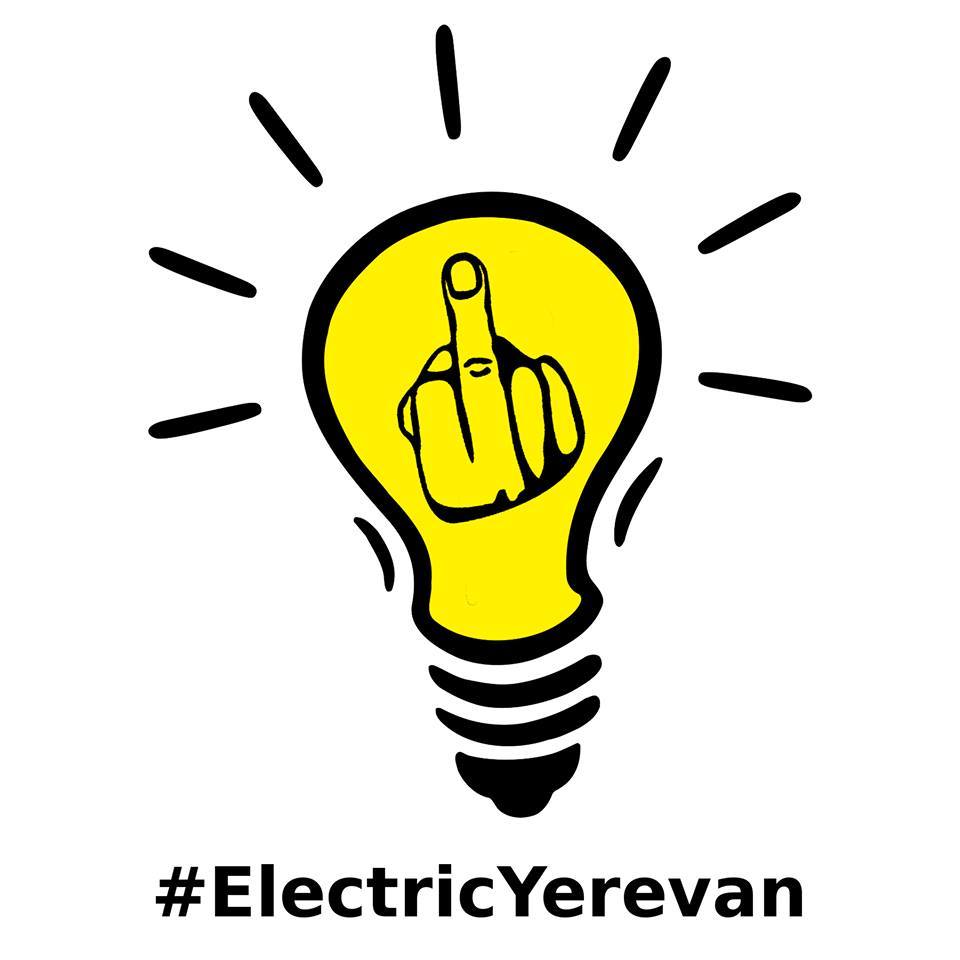 In the summer of 2015 I reported from the ground what was happening during Yerevan’s massive street protests. Below is a piece I wrote trying to explain what the protests were about that was originally published in The Armenite on June 26, 2015.

Thousands of protesters hit the streets in Yerevan to protest a 7 dram (1.5 US cent) hike in electricity rates in Armenia. After being dispersed with water cannons, protesters returned to Baghramyan Avenue with even greater numbers, setting up camp behind a line of barricades improvised from dumpsters.

Why is it happening, what’s the situation on the ground, and where will it go from here? Here is a detailed look.

See photos from the protest.

What’s the Problem?
The main problem is the 1.5 cent increase and the previous increases which have happened in relatively rapid succession over the past six years. This iteration of the rate increase was a request from the electricity grid operator which was approved by the Public Services Regulatory Commission (PSRC). Protesters argue that these increases are outpacing wage growth and make electricity too expensive.

There is a strong belief among most protesters that the rate increase is a result of mismanagement within the electricity grid operator. For its part, Electric Networks of Armenia (ENA), owned by Russia’s Inter RAO, is saying that the devaluation of the Armenian dram over the past year, as well as a general inability to recuperate the cost of operating, maintaining, and upgrading the grid at the current rates are the reasons why the rates had to go up.

According to a June 2013 World Bank report, although the government “has taken steps to mitigate increases in the cost of service in order to maintain affordability,” the price charged to consumers of electricity in Armenia is not enough to recover the cost of providing the service. That would mean that there is an inherent subsidy in the price an end user, like a household, pays because providing the electricity at lower rates than it is costing to produce and distribute. Besides the cost of the electricity, it also includes maintaining and updating the infrastructure required to provide a regular flow of electricity.

The counter argument from protesters is that if it is true that the money is needed then the problem could have been averted through responsible financial management. The ENA has gone so far as to post on its website that the price increase is not the result of mismanagement.

Saying No to the President
When the protest started, it was a sit-in at Liberty Square in front of Yerevan’s Opera building. It was then that the president of Armenia, Serzh Sargsyan, offered to meet with the protesters. Although there was a discussion – and reports indicate that several organizers were willing to take the offer – it was ultimately rejected.

The protesters then decided to march toward the presidential palace, which is where they were met by a police barricade.

Yes, the activists have had issues of their own and it’s not always clear who is in charge. There is a decision-making body which, for example, chose to reject the president’s offer and to march toward the presidential palace.

However, after reassembling at Liberty Square the day after being dispersed by water cannons, an offshoot group announced that they were marching back to Baghramyan Avenue. They were quickly followed by another group telling them to turn around. It wasn’t yet time, they said.

One of the organizers with access to a megaphone was unhappy with the rogue group and announced to the crowd that they should not listen to anyone who makes an announcement about what to do but should wait until they get word from him or his cohorts. They agreed.

But, despite the occasional confusion or errant individual or group, there is an understanding: respect the other person’s reason for being here. Or, just respect them. And it shows. The dancing, singing, sharing, cleaning, and living of these people who don’t know each other is what is energizing them and driving this thing forward.

The atmosphere, pun and all, is electric.

No Political Parties
Previously, massive public gatherings were the doing of political parties with the goal of removing the government and replacing it with themselves. No more.

The last mass mobilization, led by Raffi Hovannisian during his so-called Barevolution when his antics like declaring a hunger strike and going to pray at the Armenian Genocide Memorial with Armenia’s police chief left the populace tired and disenchanted.

Although they’re in the crowd, the protest has thus far been unique because of the absence on the center stage of protest-junkies like Raffi Hovanissian, Nikol Pashinyan, Levon Zurabyan, Zaruhi Postanjyan, and the members of Founding Parliament.

This group has expressed no interest in protesting under the banner of any political movement. As much as #ElectricYerevan is meant to send a message to Armenia’s government, it is a clarion call to Armenia’s opposition parties: you are irrelevant.

Fuck
The word “fuck” has taken center stage during the protests. Middle fingers and signs with the word have become symbols of the movement. It’s a propos for the anti-establishment atmosphere of the protest but does little for helping to understand the grievances of the protesters – besides that they’re angry.

And then this for good measure.

Our activists were so heroic today, the whole of #ElectricYerevan resonated in one unified voice “Fuck You #Erdogan” pic.twitter.com/2z6gRxEDBV — Rose_Anna (@avaruza) June 25, 2015

We’re not sure, either.

It’s Not Maidan
Although the majority of protesters have tried to emphasize the apolitical, Armenia-centric nature of the movement, they have to contend with a stream of media reports from Russia, Ukraine, and the West which have tried to characterize the protests in whatever way befits their perspective.

For the semi-casual observer, it might seem like there is more to the protest than the electricity rate increase because some of the protesters have a strong anti-Russia, pro-European, or pro-West, history. There is definitely an element of rage that a Russian-owned company is imposing its will on the people of Armenia. But, there is little to suggest that the mass of people have a desire to turn this into a Ukraine-style Maidan revolution.

Paradoxically, it’s the heavily editorialized and frequently false reporting by Russian media that that is not winning Russians any friends among the protesters.

What Next?
The protesters don’t look like they’re going anywhere. After the initial excitement, both the activists and police have settled into their positions.

The protest has been split into two sections, one in front of the protester barricade, where famous actors and others have formed a first line, and one behind the barricade. The first, smaller section was created as a message to police that if they advance, they will have to go through the line of more well-known people and not just regular citizens.

The area behind the barricades is where the mass of people congregate and, if it weren’t on a major thoroughfare leading up to the presidential palace and parliament in the capital of a country, you might think you were at a rock festival. Protesters are singing, chanting, eating, smoking, drinking, and sleeping there. They have set up a water station and there was at least one bed which a group of young men had brought.

As for the police, their side has been thinned out considerably since the first days and they have set up their own metal barricade behind which a line of police stand guard 24 hours a day. The police who are stationed on the side of the protesters have been photographed playing soccer and dodgeball with activists, as well as playing with children. Some young protesters have even brought them food.

The only major announcement the government has made came from Prime Minister Hovik Abrahamyan that poorer families will receive financial aid to help pay for the increase in electricity prices, which he added the government will not budge on. The protesters weren’t assuaged by the announcement and some called it a tone-deaf resolution to their demands.

The protesters haven’t made any more announcements so it looks like they’re just waiting until the government agrees to their demand.

Moving Forward
It’s hard to know for sure but it’s doubtful that the 1.5 cent increase in electricity rates is going to hit hard the fashionable, tech-savvy youth who are on the streets. Or the actors and other famous folks between the barricades. The people who will be most affected are those living outside of Yerevan and, otherwise, the jobless, poor, and elderly. In short, not most of the people who are on Baghramyan Avenue.

But that’s not the point.

This is less about the electricity rate hike than it is about general discontent. And whether or not the discontent is well-founded is secondary. The point is that there are people who are unhappy enough with the status quo that they’re willing to sleep on a street overnight, get hosed down with a water cannon, then come back.

It’s a lesson the government seems to have trouble learning. This problem, like the ones that preceded it, was preventable. But, even after Mashtots Park, the 100 Dram movement to stop the increase in public transportation rates, and the Dem Em movement to revoke a decision by the government on mandatory pensions, the government continues making the same mistake.

Though each complex in its own way, one issue preceded each public mobilization: a lack of communication by the government as it made and implemented its decision. In each case, as well as this one, a decision was made with little or no public debate and implementation went into effect almost immediately. The fly-by-night approach gives you the impression that the idea is to sneak it past the people. But is there any question that those same people are not paying attention? The answer is very clearly no so why is it so hard to understand?

Everything the government does is not inherently bad. On the contrary, it has adopted policies which have led to progress and a general betterment in living standards over the past two decades. One need only look to the burgeoning tech industry, the proliferation of goods and services or, ironically, the significant improvement in the availability of utilities including 24-hour electricity, water, and Internet.

Unfortunately for the government, its seeming lack of interest in remedying its approach about how to roll out decisions that impact peoples’ lives is making its own ability to govern unnecessarily difficult. Things like having believable explanations for why a decision was made, communicating those explanations, allowing for a public debate, and not blasting nonviolent protesters with highly pressurized water is a good start.

If the government chooses not to learn its lesson and does not find a way to interact with the people more effectively, especially this cadre of youth with high expectations, it can expect to suffer through several more of these massive protests until it figures it out. For the good of the country, it’s best that it does soon.

Speech at Columbia University’s SIPA Graduation Ceremony
Khoseenk Hayeren, Or You Can Say It In English