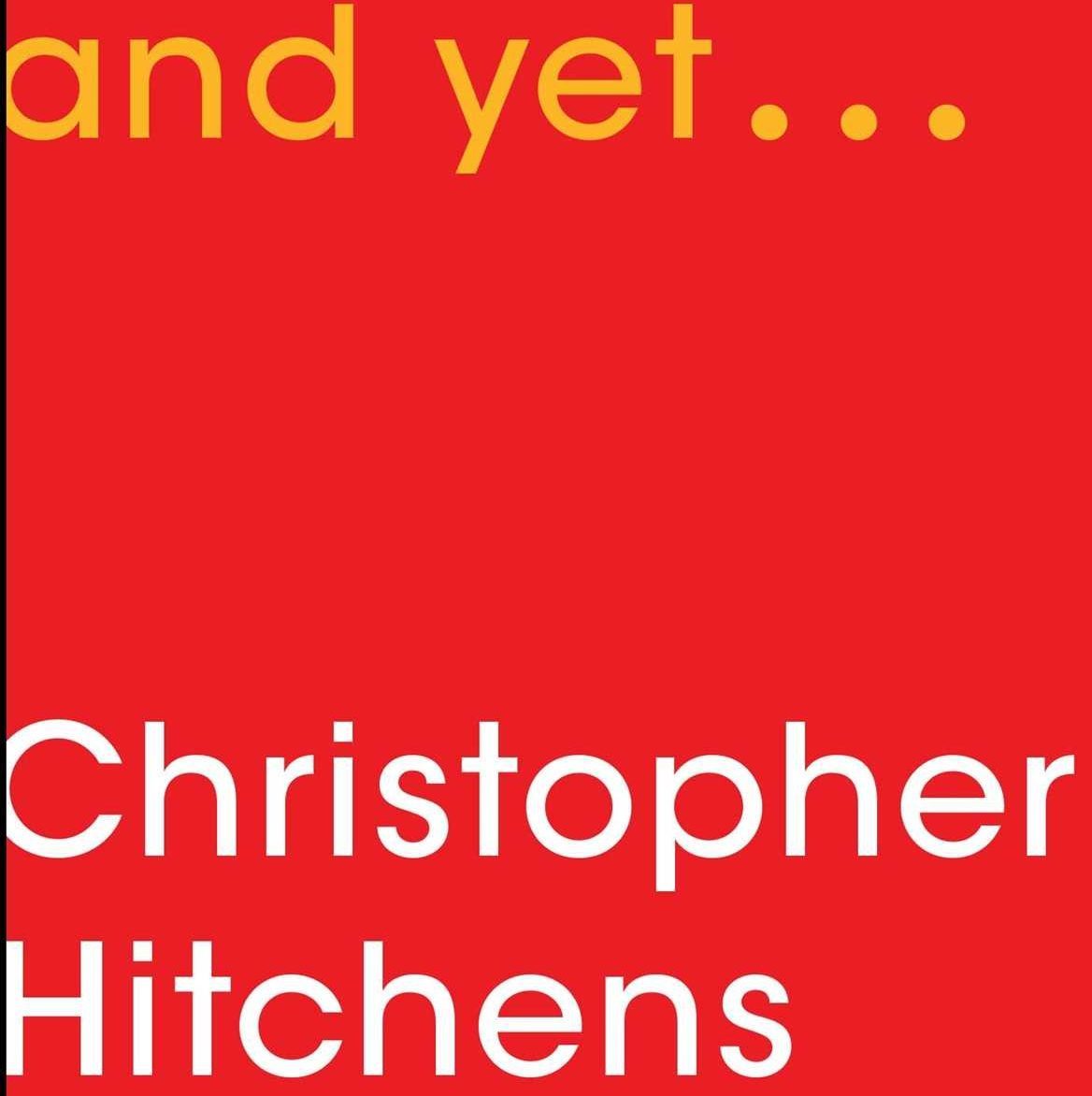 Reading some writers risks being confronted with one’s ignorance.

Writing on the heels of reading – and being humbled by – Hitchens compels me more than usual to avoid trite allusions to inimitability and effusive sycophancy. His infectious prose recounts the intricacies of topics so unrelated that you try to account for how much time you’ve wasted in your life and how much of that could have been applied to procuring a fraction of what he’s able to recall in a single essay in expert detail.

It is a rare pleasure to have your mental faculties tested while being delighted by the test itself. This is Hitchens’s genius in And Yet…, an array of essays spanning the orthodox socialism of Che to the limitations of self-improvement (through smoking cessation programs and Brazilian waxes, for the record) to resolute dismissals of Christmas (more than one) and inquiries into the lives and works of every strain of author from his evidently esteemed Orwell to Rosa Luxemburg to Orhan Pamuk to V.S. Naipaul.

What was that about sycophancy?

My first conscious exposure to Hitchens was in debates about the existence of God. As an ardent atheist – anti-theist according to his own description – and one of the so-called Four Horsemen of New Atheism (the others being Richard Dawkins, Sam Harris, and Dan Dennett), Hitchens participated in a number of these debates. He was as captivating – and nearly as eloquent – on stage as he was on paper. So much so that Robert Barron, a Catholic bishop and an estimable intellectual in his own right, dedicated a YouTube video to explaining why he was fascinated by Hitchens and, despite not agreeing with everything he said – even becoming infuriated at some of it, – he dutifully listened to and read whatever Hitchens produced.

The bishop makes a fine point: Hitchens’s writing was, more often than not, polemical. He was not out to make or maintain friends, for which he was intermittently subject to the opprobrium of his leftist compatriots. So, his writing about subjects like Christmas or GK Chesterton can be considered inflammatory by sensitive souls and unacceptable for the norms of genteel discourse that he undoubtedly had little interest in preserving. The paradox is that the pull of his language, exactingly refined through decades of effort after fine boarding school and Oxford educations, is hard to resist. With this in mind, it is impossible to ignore his subdued but recurring exaltation of George Orwell, where interpolations about the writer’s love and use of the English language seem autobiographical.

Besides sharing a talent for deft wordsmithery, Hitchens and Orwell also shared an abiding sense of atheistic and socialistic justice. The relevance of the former qualifier is that both men saw their role as an exponent of justice through socialism and rejected the idea that their disposition was a function of any religiosity, a charge Hitchens had to withstand from his devoutly Catholic brother, Peter. It is hard to say whether Hitchens was inspired by Orwell or whether he simply took solace that there had been another one like him before – a kindred spirit, if an anti-theist would accept such an ethereal characterization.

Hitchens was characteristically skittish about membership under any big tent that limited his freedom to say what he believed to be right on the issue’s merits as he saw them. However, his was not a superficial rejection in the tradition of aspiring intellectuals for whom self-asserted independence dubiously exists superimposed on political or cultural views that march in unison with those of their contemporaries.

His most controversial of breaks with his allies in the Left was support of the war in Iraq and the deposing of Saddam Hussein. It is in such extreme circumstances that a man’s principles are tested as the pressure to conform to a certain worldview of fellow members of your group becomes relentless. And it is here where I believe Hitchens proves that his commitment to the principle he holds dearest – justice – supersedes all else.

Being who he was, Hitchens would have been well aware of less noble motivations for the removal of Hussein or the crippling of Iraq. But, this man who moved to the United States because he believed the United Kingdom was too stifling of his right to free expression, was convinced that Hussein’s suppression of freedom and violence against the people, including the Kurdish minority, were sufficient for removing him from power. It will be many decades before disinterested analyses of Hussein’s removal and the ensuing war emerge but none of that will change the courage of Hitchens to plainly and publicly say what he believed to be right, whatever the consequences. This, more than his acerbic polemics and delightful sentences, should be the legacy of a man who lived what he believed.

The Marvels of Artisans

Lord of the Flies and Our Unchanging Nature