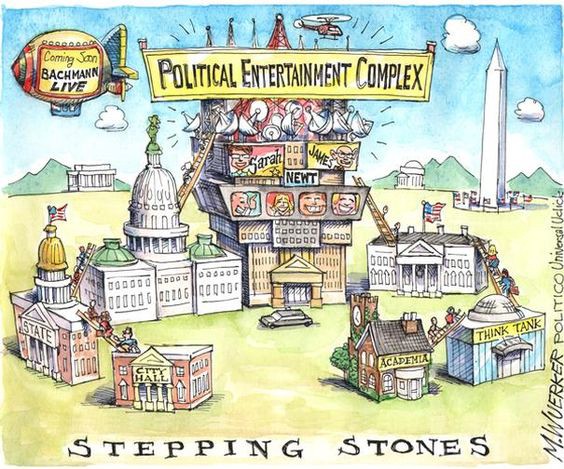 The presidential debates this year have been anything but presidential. But, one thing has been exceptional: the ratings. In fact, the first debate drew almost as many people as the Super Bowl, the most watched television event in the United States. It’s not far-fetched to posit that it hasn’t been Hillary Clinton’s riveting grasp of policy issues which has people tuning in. Rather, it’s undeniable that her opponent and perennial showman, Donald Trump, has been the draw for these new viewers. After all, it seems every time you turn on your TV or check the news online, there is some new and preposterous thing Trump has said. What’s not entertaining about that?

Many people would agree that politics shouldn’t be seen as entertainment but it’s unlikely many would think they are culpable in making it that way. After all, how could their watching CNN, MSNBC, Fox, or Comedy Central to become more informed citizens lead to such a result? In reality, that is precisely what is happening because entertainment is inherent to the way these channels report on politics. It’s not interested in the minutia of bills or the complexity of policies. What it wants, like any entertainment, is fast, exciting, sexy, gory, lewd content that can be quickly consumed and discarded. Its worst invention, the sound bite, haunts politics to this day and is the epitome of the demise it caused: short, vapid, reductivist nonsense masquerading as political thought. Trump’s appearance on the national political stage is the culmination of American politics becoming another cog in the entertainment-oriented culture of the United States.

In other, slightly more normal elections, politicians could hardly expect to excite people with their stump speeches loaded with policy prescriptions nobody — including sometimes themselves — actually understood. The closest anybody came in recent memory was Barack Obama. His “Hope” and “Change” campaign slogans invigorated a nation for the first time in a long time. But after his election, it didn’t take long for the luster of idealism to fade into the crude world that is politics. Despite his best efforts, even the ultra-idealist Obama was brought down a few notches. He registered successes but couldn’t extricate the United States from its destructive foreign policy, despite promises to the contrary. That said, nobody would call Obama entertaining. He’s cool and smart but he’s not entertaining.

Ever since party politics became the norm sometime in the 1800s, American politics has hardly been a cerebral affair. The conventions — which now resemble festivals, complete with musical performances, bright lights, and confetti — were made for posturing and demagoguery. An outgrowth of populism, they are a far cry from the intellectual — if nevertheless vigorous — politics of the Founding Fathers. But it’s grandstanding, crowd-pleasing rhetoric, and fireworks that politicians use to attract attention today, in deference to an entertainment industry that demands it.

It’s not supposed to be this way.

Indeed, it is a plain contravention of the United States’ founding principle of government: republicanism. Although implicitly lamented as an anti-democratic anachronism (because why shouldn’t the people govern in tandem with their representatives?), republicanism was chosen as the form of government by the country’s Founding Fathers because they needed a concept of representative government that gave some power to the people to choose those who will work in their interest but not so much that the people will control every decision.

It is hard to deny that when politicians are apt to appeal to voters’ basest sensibilities, either at their own initiative or as a result of media prodding or both, republicanism in particular and politics in general devolve into what we have today: a form of cheap entertainment, not unlike an exciting but ultimately unsubstantial Michael Bay movie. The problem is, if a movie is unsubstantial, nobody loses their job or their opportunity to get educated or their life. But politics and a lack of seriousness about it can very much lead to these consequences.

Politics should not be entertainment. Politics is a serious business and to treat it with the same flippancy of a really real reality TV show is not only irresponsible, it’s dangerous.

Just like everybody who watches CNBC thinks they’re a day trader or the next Warren Buffet, the nonstop stream of cheap political news peddled by large news organizations interested in inspecting every government official’s every move has rendered every viewer a self-styled political scientist. This is all justified by the belief that representatives owe the public and its supposed tool, the media, an answer whenever it is demanded.

And just like public companies inflate profits to pander to shareholders, many who don’t particularly understand the nuances of the business but think all the profit charts need to have an unhindered upward curve, politicians now pander to constituents through media on a never-ending publicity campaign, exchanging substantive work for cheap barbs and ephemeral political capital.

The progressive downfall of politics as a serious occupation with grave consequences has culminated in the person of Donald Trump. He is not the first one to use TV, to say wild things, to be uneducated, to be simplistic, or to be boorish. But, he has capitalized on a creature of our creation: our obsession with politics that is supposed to be entertaining, rather than somber, boring, and cerebral.

So the next time you’ve got on CNN or Fox News or MSNBC or Comedy Central for your political fix, ask yourself if you’re helping perpetuate politics as entertainment and encouraging politicians to focus on their public image and not on the work they were elected to do. Then turn it over to C-Span. Otherwise, don’t be surprised when a media-savvy pseudo-politician exploits ready consumers of inane political entertainment to his own benefit.